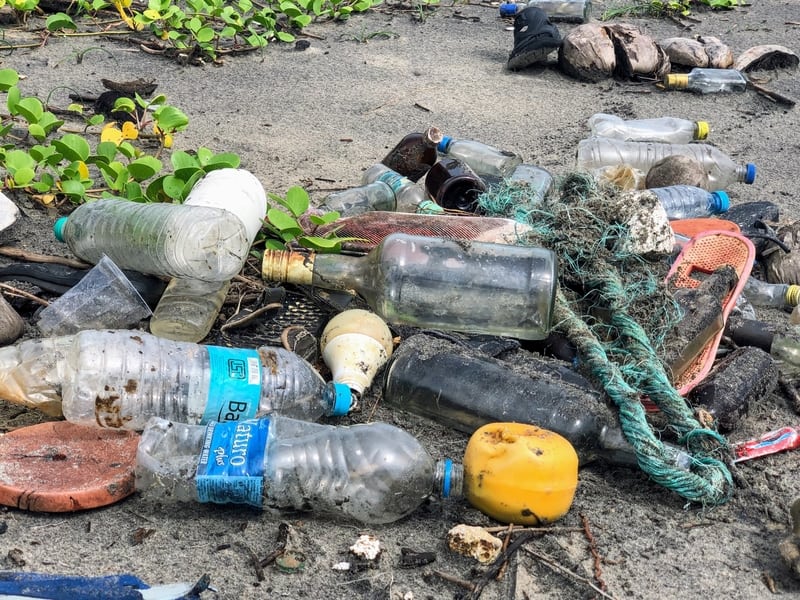 Do you ever feel a tinge of guilt when, in the course of preparing a meal, you throw out food packaging? I really started to after reading about efforts to reduce a mass of plastic waste floating in the North Pacific Ocean. Dr. Marcus Eriksen of the Algalita Marine Research Foundation estimates it could be twice the size of the continental U.S.!

Held in place by swirling undercurrents, the “soup” is made up of all kinds of plastic: shopping bags, bottles, food wrappers, even Legos. Storm drains carry much of this to bigger waterways; some of it blows directly out of landfills. Fragments have been found in the bellies of marine animals and birds. Many are choked or trapped by the waste. It goes without saying that we could eventually ingest this stuff via seafood.

I had no idea this collection of waste, also called a “plastic continent,” existed until a few months ago. I read there is a smaller mass in the Atlantic Ocean as well. It is believed the waste in the Pacific has been growing exponentially each decade since the 1950s (shortly after plastic was invented).

So how do we avoid adding to the “Plastic Continent’s” population?  Recycling helps. Milk jugs, soda and water bottles are often made into useful items like carpet, jacket fill, even T-shirts. Some products, such as plastic lumber, enjoy a long life in their reincarnation.

However, plastic’s quality degrades each time it is reheated, and much of the time, plastic is reprocessed only once before it is sent to a landfill or incinerator.

While most plastic is recyclable, only a fraction gets recycled. People tossing bottles into garbage cans is one reason, but another is because the recycling business is neither simple nor lucrative where plastic is concerned.

According to Eureka Recycling, a non-profit organization in St. Paul, Minnesota: “The technology exists to recycle most kinds of plastic, but a lack of infrastructure prevents all but the most widespread kinds of plastic from being recycled … Communities must be able to cost-effectively collect and sort plastic, and businesses must be willing to accept the material for processing.”

What can you do? Try to avoid using plastic when possible. Get a stainless steel water bottle, cut down on take-out food, bring reusable bags to the grocery store. If you forget to bring your bags into the store, you can wash and use them to store food in the freezer (after wrapping food in wax or parchment paper), labeling the contents with masking tape. Use colorful plastic bags as wrapping paper. Wash and reuse zip-lock bags. More suggestions can be found at the web sites below.

Also, try to buy food and other products that do not require a lot of packaging. Shopping at farmers’ markets or around the perimeter of the grocery store will provide less packaged-and less processed-foods. Support recycling efforts in your community.

Reduce, reuse, recycle. Our health and the earth’s health depend on it.