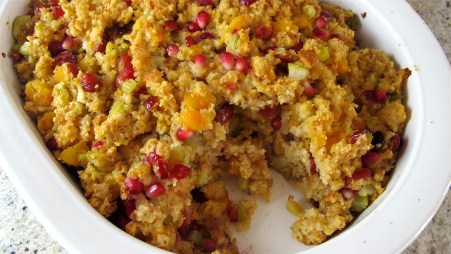 This recipe is inspired by one on the POM Wonderful web site from a few years ago. We tinkered with it a bit to make it healthier and it’s heavenly on the Thanksgiving table. You can make the stuffing up to a day ahead and heat it in the oven before dinner.
Print Recipe
Ingredients
Instructions
Recipe Notes

Like this recipe? Try our two-week free trial to see just how simple getting dinner on the table can be!

Food is one of the most powerful tools for building connections. At The Scramble we believe food should be savored, enjoyed, and shared, rather than restricted, avoided, or argued over. We provide a solution to your mealtime challenges by showing you how simple planning, cooking, and eating can be.