We all know that it’s valuable but these family dinner statistics highlight the importance of sharing a meal together, even just a few times a week. 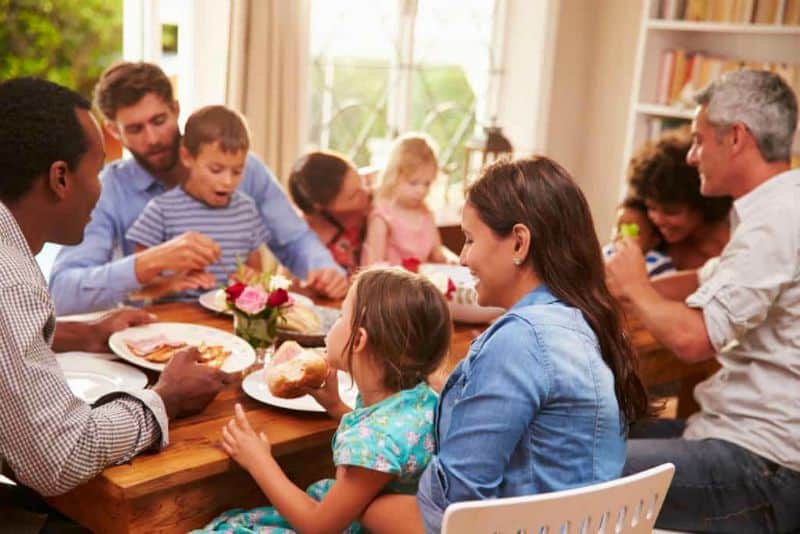 Why is family dinner so important?

We’ve all heard it before: family dinner is important. It is valuable for deepening family connection, hearing about each other’s days, and enjoying some quiet time together.

And while we know this to be true, making regular meals together a reality can be challenging. In fact, in a recent study, 84% of parents agreed that family meals were important, but only 50% of family dinners were eaten together.

In order to help you to better understand the challenges as well as the benefits of family dinners, we have pulled together some family dinner statistics that will show you why carving out the time together for even a few meals a week can make such a difference. 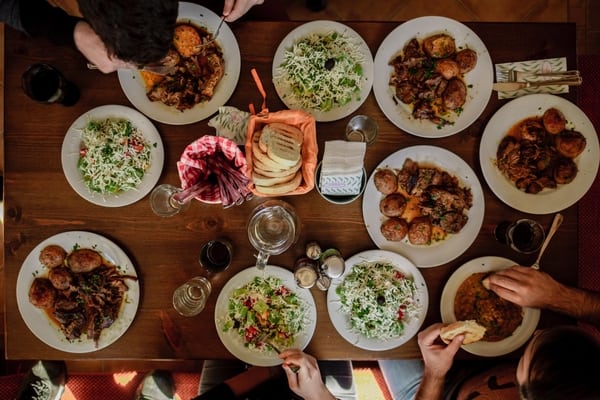 First, it is important to recognize the reality of our world and how things have changed. These family dinner statistics highlight what that means and what it looks like.

Fewer meals together: In the past 20 years, the frequency of family dinners has declined 33 percent. In addition, a recent poll by YouGov found that 62% of parents with children under 18 wish they had family dinners “much more often” or “somewhat more often.” 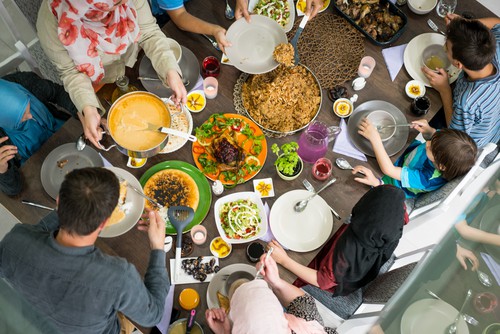 …But research shows that dining together is more important than you might think!

Just because things have changed, though, doesn’t meant that the value of meals together has diminished, as these potent family dinner statistics highlight.

According to The National Center on Addiction and Substance Abuse at Columbia University, kids and teens who share family dinners three or more times per week: 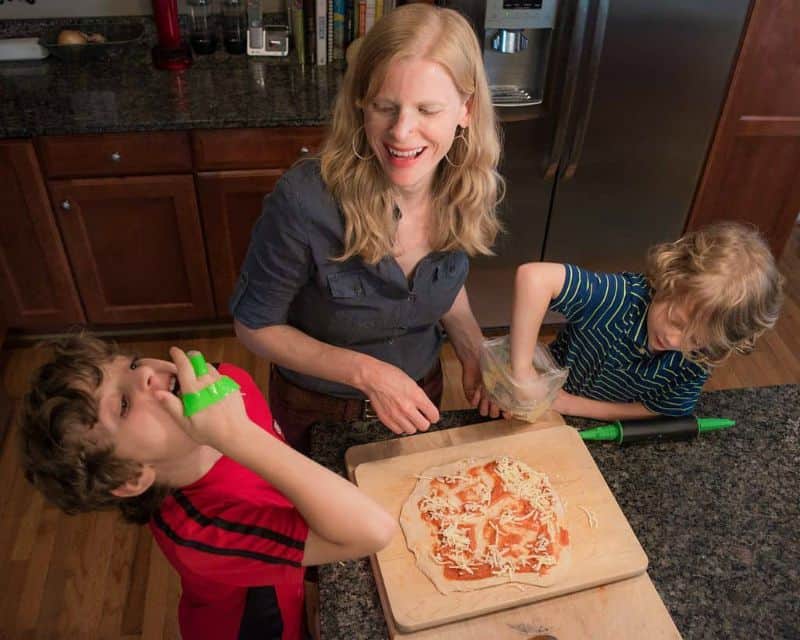 Family Dinners Are Good for Our Kids’ Emotional Health 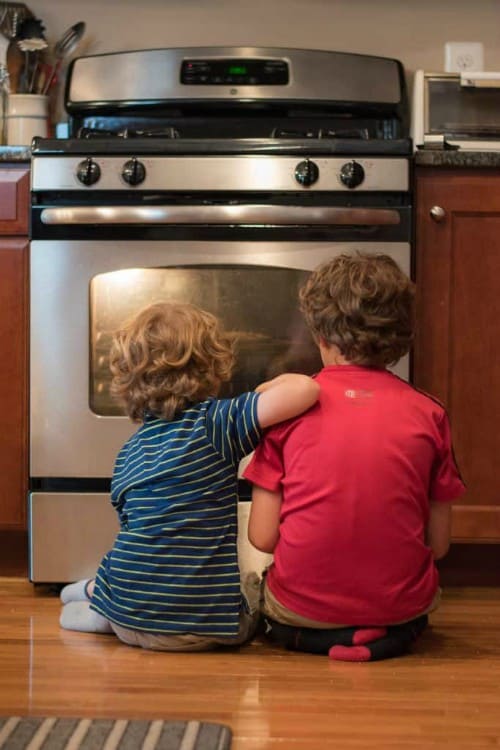 Family Dinners Are Good for Our Kids’ Physical Health

Family dinners also teach our children how to have a healthy and happy relationship with food. According to the American College of Pediatricians, children and adolescents who share family meals three or more times per week are more likely to be in a normal weight range and have healthier dietary and eating patterns than those don’t.

And my personal favorite: People think you are a better cook—and a better person—if you serve vegetables at dinner, according to the Cornell University Food and Brand Lab.

In short, the more family dinners you share, the greater the benefits for children and teens! 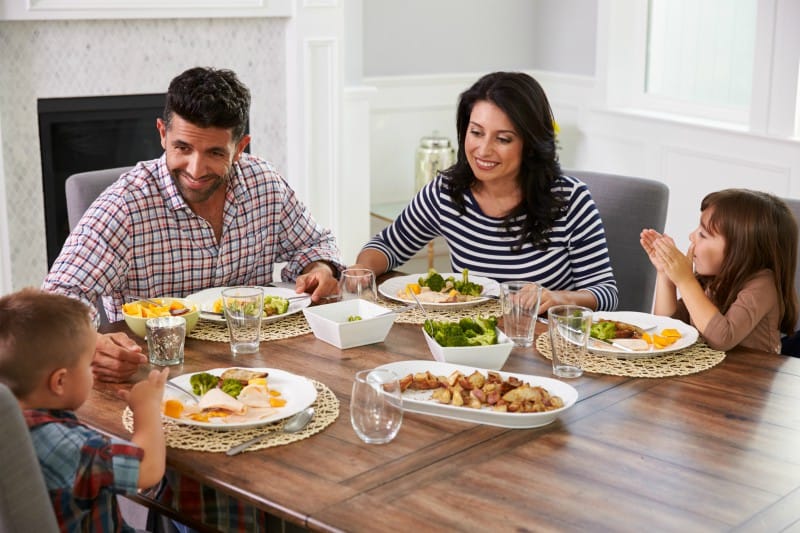 We asked families what they thought. They said…

With The Scramble’s family-friendly meal plans, we make it possible to:

Want some easy dinner inspiration? Check out some of our resources including tips on how to liven up steamed rice and 15 toppings for baked potatoes to see how simple staples can become a full and delicious meal!

How to Start Healthy Habits as a Family - 7Core Wellness

[…] as eating meals together as a family can have a lot of long lasting benefits.  According to The National Center on Addiction and Substance Abuse at Columbia University, kids and teens who share family dinners three or more times per […]

[…] the number of dinners families eat together each week and the time spent eating meals together have significantly decreased over the past 20 years, and most families say they wish they would do it more. As busy as family […]

Parents as Agents of Change: A Group Behavioral Intervention for Parents of Children with Avoidant-Restrictive Food Intake Disorder • kyu̇r-ē-ˈä-s(ə-)tē

[…] and children planting, growing, interacting with and preparing food in its fresh and natural form. Eating dinner together as a family is a hugely important activity. Here children observe and learn what to think about food and how to […]

Hello, I think your website might be having browser compatibility issues. When I look at your blog in Ie, it looks fine but when opening in Internet Explorer, it has some overlapping. I just wanted to give you a quick heads up! Other then that, excellent blog!

Thanks so much, Eric! We'll look into that right away!

This website uses cookies to improve your experience while you navigate through the website. Out of these, the cookies that are categorized as necessary are stored on your browser as they are essential for the working of basic functionalities of the website. We also use third-party cookies that help us analyze and understand how you use this website. These cookies will be stored in your browser only with your consent. You also have the option to opt-out of these cookies. But opting out of some of these cookies may affect your browsing experience.
Necessary Always Enabled
Necessary cookies are absolutely essential for the website to function properly. This category only includes cookies that ensures basic functionalities and security features of the website. These cookies do not store any personal information.
Non-necessary
Any cookies that may not be particularly necessary for the website to function and is used specifically to collect user personal data via analytics, ads, other embedded contents are termed as non-necessary cookies. It is mandatory to procure user consent prior to running these cookies on your website.
SAVE & ACCEPT
24 shares
EXPLORE