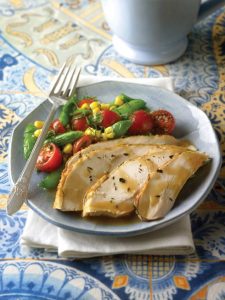 November not only features America’s favorite family dinner holiday, Thanksgiving, but it’s also American Diabetes Month. Sponsored by the American Diabetes Association, the month-long program focuses the nation’s attention on the issues surrounding diabetes and the people affected by the disease. According to the Association, nearly 26 million children and adults in the United States have diabetes. Recent estimates project that as many as one in three American adults will have diabetes in 2050. Fortunately, healthful meals featuring lean protein, fruits and vegetables and whole grains, along with regular exercise, can prevent certain types of diabetes and help people with diabetes feel better and stay healthier.

In her book The Mediterranean Diabetes Cookbook (Nautilus Silver Award and Starred Review by Publishers’ Weekly), Chef Amy Riolo (who I am also lucky to call my friend), demystifies the Mediterranean Diet. Here we share her Southern French Style Herb Roasted Turkey recipe, adapted from her cookbook, just in time for Thanksgiving.

The combination of herbs, garlic, spices and lemon juice make a flavorful, moist turkey that is simple to prepare. Much leaner than red meat, turkey doesn’t need to be saved for Thanksgiving. Serve this delicious roast whenever you have a large gathering.

Preheat the oven to 425 degrees. Use 1 Tbsp. olive oil to grease the bottom of a large roasting pan.

Place the whole garlic head, 1/2 lemon, rosemary, thyme and sage inside the cavity.  Squeeze the juice from another 1/2 lemon over the top of the turkey.

Place the turkey in the oven, add a cup of water to the bottom of the pan, and roast for 1 hour, uncovered.

Baste the turkey after the first hour of cooking. If the turkey looks very brown, cover it with foil.  Continue to bake for another 2 – 2 1/2 hours or until the internal temperature of the thickest part of the turkey breast meat reads 165 degrees on a meat thermometer.

Remove the turkey from the oven and place it on a carving board. Let it rest for 10 minutes before carving.

Strain the liquid from the bottom of the pan into another saucepan using a large mesh strainer.  Add the juice of 1 lemon to the saucepan and stir.  Bring it to a boil over high heat and cook for 10 minutes, or until the sauce has reduced. Taste, and adjust the seasoning if necessary. Serve sauce in a gravy boat with the turkey.

About the Author
Amy Riolo is an award-winning author, chef, Culture of Cuisine cooking show host, cooking instructor, lecturer and Mediterranean expert. She makes frequent appearances on television and radio programs both in the United States and abroad and appears weekly in 90 second cooking videos entitled “Culture of Cuisine” which airs on nationally syndicated news shows on 28 different channels across the United States.

This website uses cookies to improve your experience while you navigate through the website. Out of these, the cookies that are categorized as necessary are stored on your browser as they are essential for the working of basic functionalities of the website. We also use third-party cookies that help us analyze and understand how you use this website. These cookies will be stored in your browser only with your consent. You also have the option to opt-out of these cookies. But opting out of some of these cookies may affect your browsing experience.
Necessary Always Enabled
Necessary cookies are absolutely essential for the website to function properly. This category only includes cookies that ensures basic functionalities and security features of the website. These cookies do not store any personal information.
Non-necessary
Any cookies that may not be particularly necessary for the website to function and is used specifically to collect user personal data via analytics, ads, other embedded contents are termed as non-necessary cookies. It is mandatory to procure user consent prior to running these cookies on your website.
SAVE & ACCEPT
2 shares
EXPLORE