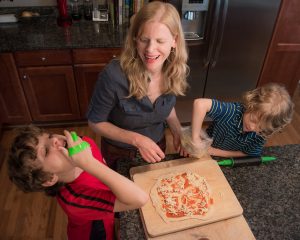 The other night at dinner my 8-year-old, who was a picky eater for many years, said, out of the blue, “Do you remember when I used to be picky? I’m so glad I’m not anymore.” We then talked about how much things have changed and memories he had from dinners when he was younger. It was a wonderful moment because it showed how much his identity as an eater has changed. As we talked, it struck me as an amazing opportunity to learn more about a child’s experience as a picky eater, so I asked if I could interview him.

An Interview with My Formerly Picky Eater

What is your favorite food?
Do I have to say one thing? Pizza, spaghetti and meatballs, burgers.

What is your least favorite food?
I don’t know because I haven’t tried many bad foods. Well, I don’t like stir-fry.

Do you remember when you were a picky eater?
Yes.

What did it feel like to be offered a food you didn’t like?
Well, I didn’t even eat it. But I also felt sad that I wouldn’t eat anything. [Note: the rule in our house is that dinner is dinner, I am not going to make another meal. That said, I always strive to have at least one food on the table that the kids can fall back on if they don’t like the main dish, even if that is just plain rice or salad.]

Do you remember me or your dad trying to convince you to try foods you didn’t want to eat?
Yes.

Do you remember playing games with food?
Yes. I remember pretending to be a giant eating and that soup was a lake with boats and broccoli was trees and I was going to eat it.

Did that change the way you felt about certain foods?
Yes. It convinced me to expand my horizons.

Can you think of a food you used to not like but now you do?
Mixidihno [a Brazilian fried rice dish].

How did that change?
Putting meat in it, because then I wanted to try it. [Note: this is so true! One of the tricks I discovered with him was that if a dish had meat in it, even just a little bit, he was much more open to trying it because he loves meat so much and it is not something we eat everyday, so it made the food feel more special.]

What made it easier for you to try foods you weren’t sure about?
Knowing that even if I don’t like it, it’s fine, as long as I don’t say it in a rude way.

If you could tell picky eaters anything, what would it be?
Smells and looks shouldn’t determine what food tastes like and what you are going to like or not like.

If you could tell the parents of picky eaters anything, what would you tell them?
Not to get mad because their kids are picky. There is always a way to help your kids to not be picky. You just need to try different ways.

I hope that this glimpse into the mind of formerly picky eater was helpful to you! If you would like to help your picky eater to become more adventurous, check out these posts on picky eating.

[…] An Interview with my Formerly Picky Eater […]

[…] Interview with my formerly picky eater […]

[…] in my experience both as a formerly picky eater myself and having raised a son through his very picky phase, an approach without pressure, negotiation, threats, and sneaking (all of which I tried without […]

[…] family started family-style dining when my son was in the depths of his picky phase and I was terrified that he would never eat another vegetable. To assuage my fears, I would […]

How to Get Kids to Eat Fruits and Vegetables (One Tip You've Never Heard Before: NanoSalad)

[…] When my youngest son was in his picky phase and I was worried about his growth, I went into full on research mode, searching for tips, ideas, and answers that would allow us to shift the negative dynamic that was rapidly developing when it came to mealtimes. […]

This website uses cookies to improve your experience while you navigate through the website. Out of these, the cookies that are categorized as necessary are stored on your browser as they are essential for the working of basic functionalities of the website. We also use third-party cookies that help us analyze and understand how you use this website. These cookies will be stored in your browser only with your consent. You also have the option to opt-out of these cookies. But opting out of some of these cookies may affect your browsing experience.
Necessary Always Enabled
Necessary cookies are absolutely essential for the website to function properly. This category only includes cookies that ensures basic functionalities and security features of the website. These cookies do not store any personal information.
Non-necessary
Any cookies that may not be particularly necessary for the website to function and is used specifically to collect user personal data via analytics, ads, other embedded contents are termed as non-necessary cookies. It is mandatory to procure user consent prior to running these cookies on your website.
SAVE & ACCEPT
1 shares
EXPLORE
0
0
Your Cart
Your cart is emptyReturn to Shop
Continue Shopping