These Light-as-a-Feather Apple Fritters are a fantastic snack or dessert. They’re easy enough to make for a weeknight treat, but special enough to serve to guests or enjoy during a holiday meal.

The first time I was introduced to apple fritters, I hated them. I found them to be oil-laden, heavy, and without much apple flavor (something I find to be true with a lot of deep-fried foods). So, after years of making pan-fried vegetable fritters as a way to get my kids to enjoy vegetables (like these zucchini fritters), I wanted to see if it was possible to make a lighter, more apple-forward version. I’m happy to report that these Light-as-Feather Apple Fritters are it! They are light, fluffy, and packed with apple flavor.

Traditionally, fritters are either small pieces of dough or a mixture of dough and vegetables, fruit, or meat that are deep-fried. Savory ones are often served with a dipping sauce, while sweet ones are often topped with maple syrup or powdered sugar.

Do Fritters Need to be Deep-Fried?

No! While fritters are traditionally deep-fried, if, like me, you aren’t a fan of that heavier taste and quality, then pan-fried fritters are the way to go. By pan-frying them you are able to use less oil, while still getting a nice, crispy outer shell.

How to Make Light-as-a-Feather Apple Fritters

These apple fritters are easy to make and will also allow you to practice some important cooking skills. In particular, this recipe is a great way to practice dicing, separating eggs, and beating egg whites until stiff.

Dicing apples is a little different from dicing many fruits and vegetables because of the core. I have found that the easiest way to dice apples is the following:

Once your apples are ready, you will set them aside and mix together the dry ingredients in a medium-sized mixing bowl.

How to Separate an Egg

Once the eggs are separated, you will mix the milk in with the yolks, blend well, and add that mixture to the dry mixture. Then, mix the apples into that mixture so that they are well-combined. Now, it’s time to make the egg whites stiff.

How to Make Egg Whites Stiff

Certain recipes will call for you to beat eggs whites until they are “stiff,” but what does this even mean and why is it necessary?

When you are using eggs as your leavening agent (meaning the thing that is going to help whatever dish you are making rise), you want to help the eggs along by adding air. In the case of these fritters, it will allow them to be fluffier and lighter in structure.

So how do you do it and when do you know they are done? Using either an electric beater or the whisk attachment on your standing mixer, you are going to start beating the egg whites on a medium speed until they are white, voluminous, and when you stop beating and lift up the beater, a peak will form, but then droop. Those are called soft peaks.

To get them to stiff peaks, the next step is to turn the beater to high and then beat the egg whites until they are glossy and when you stop the beater and raise it up, the peaks stand straight up, even when you turn the beater upright (see image above).

The final step in forming the batter is to fold the egg whites into the rest of the batter. Once you have added all of that air into the eggs, you don’t want to lose it! That is why recipes will call for you to “fold” the other ingredients into a batter.

To do that, you will use a rubber spatula or a large, flatter metal or plastic spoon, and will run the utensil along the side of the bowl and down to the bottom. Then, in a gentle movement, fold the mixture at the bottom onto the top. Turn the bowl 90 degrees and repeat. You will keep doing this, sliding down, gently folding over, and turning the bowl, until the mixture is just combined.

To pan-fry the fritters you are going to cook them basically in the same way that you would cook pancakes.

You heat a skillet or griddle over a medium-high heat with either some high heat cooking spray or a tablespoon of canola/vegetable oil or butter. When the skillet or griddle is hot, use a tablespoon-sized measuring spoon to scoop small amounts of the batter onto the skillet, placing them about 2 inches apart. Cook for 2-3 minutes and then flip and cook for another 2-3 minutes, or until they are golden on both sides and feel firm to the touch (if they are squishy, then the dough inside is still raw).

Serve immediately, while they are still warm, on their own or topped with maple syrup or powdered sugar.

While these apple fritters are best served right away, you can also store and reheat the leftovers.

To store the apple fritters, place them in an air-tight container in the fridge for up to 5 days.

To reheat the apple fritters, you can either heat them in a toaster oven until crispy (a light to medium toast setting should work well) or reheat in a skillet, about 1 minute per side. 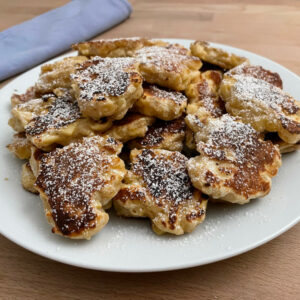 Jessica Braider
Many thanks to Robyn Webb who shared the original recipe, which I have adapted. It comes from her cookbook “You CAN Eat That! Awesome Food for Kids with Diabetes.” Unfortunately, the book is no longer in print. We love these apple fritters as a snack or dessert (or even for a special holiday breakfast!).
Print Recipe Pin Recipe
Prep Time 20 mins
Cook Time 20 mins
Total Time 40 mins
Course Breakfast, Dessert, Snack
Cuisine American
Servings 8 servings
Calories 211 kcal

Reheating Information: Leftovers can be reheated in a toaster oven using a light to medium toast setting or in a skillet, over a medium-high heat, for 1 minute per side, or until heated through. Like this recipe? Check out The Scramble’s family-friendly meal plans to see just how simple getting dinner on the table can be!

This website uses cookies to improve your experience while you navigate through the website. Out of these, the cookies that are categorized as necessary are stored on your browser as they are essential for the working of basic functionalities of the website. We also use third-party cookies that help us analyze and understand how you use this website. These cookies will be stored in your browser only with your consent. You also have the option to opt-out of these cookies. But opting out of some of these cookies may affect your browsing experience.
Necessary Always Enabled
Necessary cookies are absolutely essential for the website to function properly. This category only includes cookies that ensures basic functionalities and security features of the website. These cookies do not store any personal information.
Non-necessary
Any cookies that may not be particularly necessary for the website to function and is used specifically to collect user personal data via analytics, ads, other embedded contents are termed as non-necessary cookies. It is mandatory to procure user consent prior to running these cookies on your website.
SAVE & ACCEPT
3 shares
EXPLORE